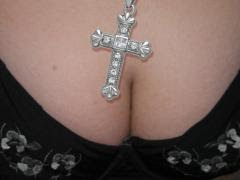 AJ, the boy, and myself went to the city today to do a little shopping. We stopped and ate lunch at CiCi's Pizza. It isn't my favorite place in the world to eat but it has pretty good pizza, it's all you can eat, and it's cheap. All parents of pre-teen boys can understand the virtues of these three elements. We showed up around 1:00 pm and arrived after one round of After-Church eaters and before the next round.
We made our way through the buffet line and easily found a clean table, as the busboys were hastily cleaning the many recently vacated seats. Just as we started to eat, in walked the next round of After-Church eaters. It seemed that there was no end to the line of people walking in. One other thing caught my attention. The group was mostly women. And the great majority of them were very well endowed and wearing low cut dresses that showed off cleavage for days. Now I have never given thought of joining any cult but this group of large breasted women could very well make a believer out of me.
As they came off the line, they started pushing the small tables together. In short order they had surrounded us. Cleavage to the left of me, cleavage to the right, cleavage in front, and cleavage behind. We finished up our lunch and headed out on our merry way before being totally engulfed in breasts. (AJ seemed to be in a bit of a hurry.)
I can't help but keep thinking on a religion based on 'Cleavage for Christ.' The way that they showed such togetherness by pushing their tables together and breaking bread with one another. They seemed so inseparable that even a Cross Your Heart Bra could not keep them apart. It's enough to melt even the heart of a hardened cynic. Yes amazing breasts how sweet the sight that saved a wretch like me.
Posted by :P fuzzbox at 5:02 PM

I got to "Cross Your Heart Bra" and then fell off my chair! LOL!

I can imagine, but don't wanna know what was going thru the boys head!

LMAO. I can hear the song now!!!...Aamazing breasts...how sweet those mounds....

Fuzz, your perverted mind never ceases to amaze me ;-)

And while I have the cleavage, that is a church I won't be joining any time soon!

Was this the CiCi's in Amarillo? I might have to visit next Sunday.

LOL!! They were bearing thier hearts for all. Thanks for the giggle.

jim: Thanks. Hope you didn't hurt yourself.

jez: I think he was awestruck.

david: It does make one somewhat of a believer.

ali: You are no in tune with your spirituality.

travis: It was the one on 50th in Lubbock. I don't know if they have a sister group in Amarillo.

leigh: You are welcome. It's nice to see you around.