The Chuckleheads
This weekend I took my 10 year old son to see the flick, "Sky High". It was a decent movie for kids and a mildly entertaining movie for adults. The theater was packed and it was a surprisingly well-behaved crowd except for the family I had the great misfortune of sitting in front of.
The mother and father were possibly the most easily entertained people alive. At the slightest hint of anything mildly amusing they cackled like hyenas and when anything funny enough to smile at occurred they practically rolled in the aisles. Their kids acted decent though so maybe they were adopted or maybe the chuckleheads had just sucked all the humor from their lives. At least someone got their monies worth. At 11 bucks for a couple of matinee tickets and 17.50 for a couple of Cokes and Popcorns, I felt somewhat violated. Maybe next time I could go in drag and therefore carry a purse to put in some sodas and snacks but damn would I make an ugly chick.
Posted by :P fuzzbox at 11:36 PM 4 comments:

The New Look
Just a few thoughts and explanations on the new look and overall theme to this blog. First off, I would like to thank my bro Big D for taking the idea from my head and designing the look of this blog. It is just what I wanted simple but gothically elegant. In fact it looks too good for the drivel I spew on it. Secondly, the title is a combination of Blog and my given name of Doug added to stuff which is the word I always used instead of shit when talking to my children when they were small. Lastly on this blog I will occasionally rant, occasionally post a pinup, but mostly try to have a little fun just goofing off.
Posted by :P fuzzbox at 7:37 AM 2 comments: 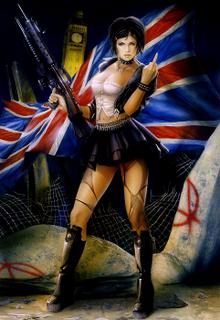 A little tribute to Britain today.
Posted by :P fuzzbox at 7:31 AM 1 comment:

Celeb Whorehounding
I generally will not blog about celebs due to the fact that others do it more frequently and better than I. But occasionally I need to vent.
The Rolling Stones are coming out with a new C.D. and I suppose they will tour off of it. The last one they did most everyone said the same thing. These guys are just to damn old. My opinion last time was if they can still rock more power to them. This time however, I will agree since seeing a commercial where 62 year old Mick was singing "Cant Get No Satisfaction." If you can't get no satisfaction at age 62 give up the Viagra and keep your ass at home. And did they disinter Keith Richards for this, My God, he has been wearing a death mask for the past umpteen jillion years.
I guess it will give hope to all those aging and flatulent Pop/Rock, Techno Rap, and Hair Band has beens to climb back on the stage. At least that ill conceived and short lived TV Show, featuring 80's has been that was on the air for so short a time that thankfully I have been able to forget it's name, died a timely death. I mean who in blue blazes gives a flying fig what Flock of Seagulls and the rest of their ilk sings now. I must admit I watched an episode of this drivel. Sometimes, like anyone else, I find myself in a mood for a good trainwreck. But once was way more than enough.
On a similar note, Mick's ex, Jerry Hall will star in a new unreality show. The premise is a contest where whining sycophantic gaywads will vie to be Jerry's "slave." How desperate for 15 minutes of fame do you have to be to compete to be the slave of an aged amazon douchbag?
Oh well it's a sick world and I am a happy man. (I stole my freind's quote. He won't mind. There is enough sickness for everyone.)
Posted by :P fuzzbox at 3:11 PM 4 comments: 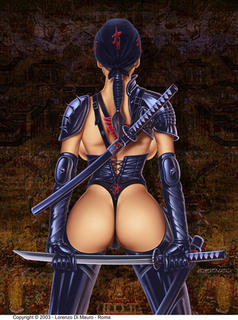 For my bro with the Sword Fetish here is "Silent Ninja" by Lorenzo Di Mauro. Bonzai!

A Quote for the day is from Emo Phillips. "Some mornings it just doesn't pay to gnaw through the leather straps."
Posted by :P fuzzbox at 5:39 AM No comments:

The Best Excuse
Yes I am the bozo that guys at the plant call in to if they are late or sick or any of the billion and one reasons they can't come in to work. After a while on the job, I thought I had heard every reason in the book with the exception of alien abduction or kidnapping until one particular bonehead called in with the most original excuse I have ever heard of. This excuse was so good that it might even be true since at most times this guy is not the sharpest knife in the drawer and this excuse required a good deal of thought.
He calls in at Three in the afternoon when he was due to start his shift at eight in the morning. He states that his alarm clock was broke so he attempted to stay up all night and so be ready to go to work at eight but he must have fallen asleep somewhere around five-thirty and just woke up. This caught me by total surprise and so for a few seconds I said nothing. When I regained my hold on the moment, I simply told him to go ahead and come in and finish out the rest of his shift.
This dim bulb had already received several warnings about being late but I had to give him a free pass on this one. Number One it might have been true and number two if it wasn't true this would give me a benchmark for any excuse that I might receive in the future and dammitt so times originality should be rewarded.
Just a follow up he eventually lost his job. He simply ran out of original excuses.
Posted by :P fuzzbox at 6:39 PM 3 comments: 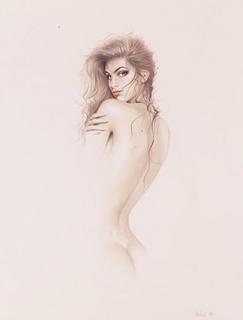 Secrets
Posted by :P fuzzbox at 6:05 PM No comments:

Word of the Day: grabasstic.
Try using the word in a sentence. A couple of examples: Example #1) My boss got busted for sexual harrassment. He was getting grabasstic with his secretary. Example #2) Those two assbags must be gay. When you see one of them there is the other one. They must be two of the most grabasstic douchebags I've ever seen.
Posted by :P fuzzbox at 5:59 PM 1 comment:

Rum Dwarves and Bad TV Ads
There is now a TV ad for Bacardi Rum that could possibly rank as one of the most ill conceived ad campains of all time. The ad starts with two black rapper types at a party who introduce themselves as Bacardi and Coke and then introduce their homeboy a black dwarf festooned in bling named Diet Coke. The ad ends with Diet Coke dancing with a gaggle of hot babes. This would be bad enough but at the end comes the kicker. The screen fades to black with the tagline "They get the job done."
In my way of thinking Bacardi and Coke are a little high end to just get the job done. Either this ad is attempting to appeal to young black males or hot babes with fetishes concerning black dwarves, although the latter is probably to small of a demograghic to address in a TV ad. Maybe Thunderbird Wine, Old English 800 Malt Liquor, or Old Crow Whiskey could be advertised as having no more redeeming value than getting the job done. A moderately priced alcoholic beverage should say more about itself than that.
As sad as it may seem if this ad works it may expand to other products. Maybe a brand of Raman Noodles for the broke and hungry that "Get the job done." Or a pair of cardboard shoes from Payless that "Get the job done." Or an escort service featuring truly obese, disfigured, or hideous women whose only virtue is "They get the job done"
Oh well as a freind of mine was fond of saying, "It's a sick world and I'm a happy man."
Posted by :P fuzzbox at 7:09 PM 3 comments:

A little cure for the summertime blues with artwork featuring Bettie Page. 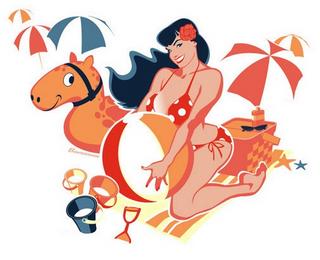 Adult ADD and the Sex Pistols
Yesterday I was watching Fuse, which for the cable impaired, is a video channel that actually shows video, when they started playing The Sex Pistols. Although I have never been a big fan of their music I figured that I would give it a listen. When the singer described his girlfreind having a leather vagina my Adult ADD kicked in. What did he mean by a leather vagina? Was it like suade or was it like naugahide? Would your penis stick to it like your thighs to a carseat on a hot summers day? Would it contrary to all laws of phisiology shrink when wet? Would a cheap slut have a vinyl vagina? Would Vinyl Vagina be a good name for a rock group? How about :P Fuzzbox and The Vinyl Vaginas? By the time all this went through my head the song was over and I still have no clue as to what he actually meant by a leather vagina. Damn my Adult ADD!!! Now have a deeper respect for the Sex Pistols. Anyone who can come up with such a descriptive term that can cause such ideas to flow from the mind is tops in my book.
Posted by :P fuzzbox at 11:12 AM No comments:

Maybe not by Jack Handy but still a Deep Thought.
I know it is a chicken or the egg type question but I have been wondering. Did most crackwhores start out as crackheads and then go to whoring or did they start as whores and then start doing crack? Just like the infamous Tootsie Pop question, the world may never know.
Posted by :P fuzzbox at 9:23 PM 2 comments: 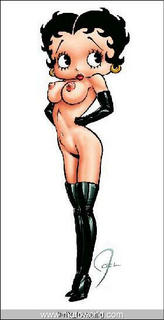 A little update to the Betty Boop mystique.
Posted by :P fuzzbox at 9:15 PM 1 comment:

POP CULTURE/GEOPOLITICAL PHENOMENA
I read in the AP that it is now hip to be square and that being uncool is now cool. Just a warning to all geeks, nerds, dorks, and all others that are rejoicing from this development that it is only a fad and will come crashing down with violent repercussions like disco, breakdancing, and Patrick Swayze. Prom Queens and Jockstraps will rise back to power and squash all bastions of uncool. The only way to avoid this fate is if George W. removes his wig and grows out his chin pubes and starts the revolution of the bald goateed men. Good Luck.
Posted by :P fuzzbox at 8:27 PM No comments: 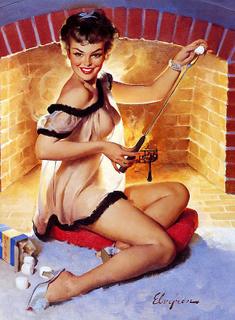 A classic Gil Elvgren pin-up that makes me want to get face down in Smore's.
Posted by :P fuzzbox at 6:49 AM No comments: 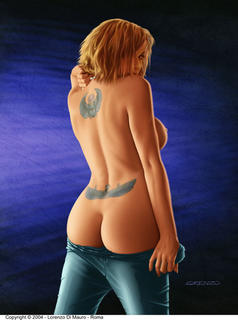 Interesting Factoid: The turkey vulture or what is commenly called a buzzard in my neck of the woods defacates on it's feet on hot days in order to cool itself down.
Posted by :P fuzzbox at 6:01 AM No comments: 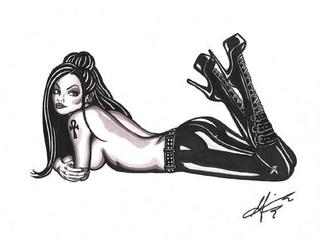 Goth Girls: Tats and Tits are there anything better