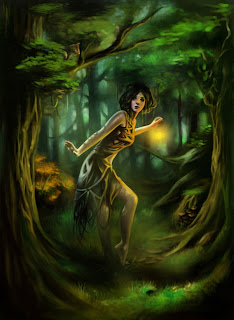 The fifteen year old female that resides in my home screwed up and damn that makes me happy. She came in two hours after her curfew and I relish punishments. It is when some of those distasteful chores that I have to do around the house actually get done.
I came by this honestly. My father loved to catch me screwing up. He did not yell or curse but would only smile an evil little grin and put my ass to work. I worked on the farm every weekend but he would always save the shittiest chores for those times that I had either come home late or came home smelling like a brewery. Before the glow of false dawn, he would crank up Iron Butterfly's 'In-A-Gadda-Da-Vida.' To this day, when I hear that tune, I feel hung over and pissed off.
Today while I am puttering around, barbequeing and putting down a few cold brews, she will be busy de-junglefying the back yard, straightening up the carport, and the list is only as large as my imagination. And damn doesn't that Iron Butterfly sound sweet!!!
Posted by :P fuzzbox at 10:19 AM 18 comments: 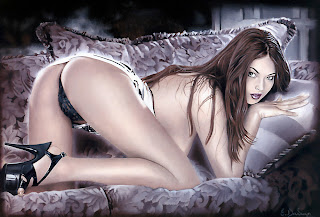 Simple Sam had a mean little itch
And it was making his life one hell of a bitch.
He spent his days gouging and clawing
Thinking his days were soon to be drawing.
You see he had picked up a problem allergy
To his sweet little woman's sweet little coochie.
With normal sex his nether region went through hell,
But with oral it was worse when his face started to swell.
He tried Benydryl and Claritin D
He even tried several home remedies.
But nothing would cure that itching curse.
He could think of no ailment that could possibly be worse.
But the answer came to him in a bright flash of light.
He would broach the answer to his sweet little woman that night.
He told her his problem and the answer so clear.
Until his rash cleared up. Could he take her from the rear?
Posted by :P fuzzbox at 8:05 AM 18 comments: 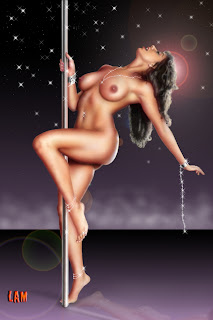 The sun always shines on the place down the road
And to get me to go you won't have to goad.
At Texas Lil's Bar and Grill, Tittie Flop, Tattoo Parlor, Day Spa, and Exotic Meats.
Every visit is a dream voyage sticky and sweet.
The day starts at noon with a Grilled Cheese
And a gentleman's club par excellance with just a slight touch of sleaze.
Then it's off for a tat, either a tribal arm band or a touching tramp stamp.
And to close it all out to the Sauna to get a little damp.
Then bring home a little wild turkey
Or possibly a little armadillo jerky.
The possibilities are endless at this place not like home
I wonder what could be said by that wandering gnome.
Posted by :P fuzzbox at 10:44 PM 27 comments: 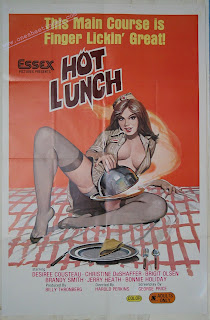 Here's to you, weird neighbor Phil down the block. Where would the world be without your dedication and diligence to the world of amateur perversion? Probably a thousand grainy video clips short in the old spam box. 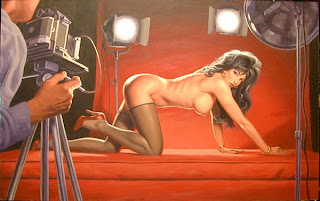 Dreaming Of A White Easter

Once again the annual Easter cold snap has hit. Yesterday we received a large snowfall. Although most of the snow melted yesterday afternoon, this morning the sky opened up and light snows fell on a crisp Easter morn. At least people don't have to color eggs in order to hide them good in the snow. Happy Easter, y'all.
Posted by :P fuzzbox at 3:12 PM 8 comments: 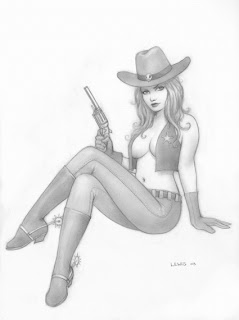 According to Peggy Post, an expert in manners, the tradition of pulling off your hat indoors started in the Old West. Cowboys would pull off their hats to prove that they were not hiding a weapon under them.
A short verse from the bawdy old folk tune, 'Rye Whiskey' : If the ocean were whiskey and I were a duck, I'd dive to the bottom and drink it all up. But the ocean's just water and I ain't no duck so I'll stay on dry land and just fuck... 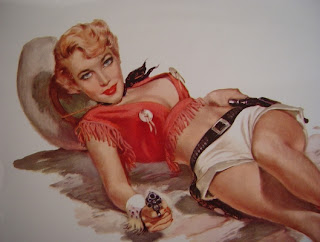 Gus McCrae, from Lonesome Dove: A man who wouldn't cheat for a poke don't want one bad enough.
A country music title that could very well be about Sanjaya Malakar: 'I Would Rather Hear A Fat Girl Fart Than A Pretty Boy Sing.' 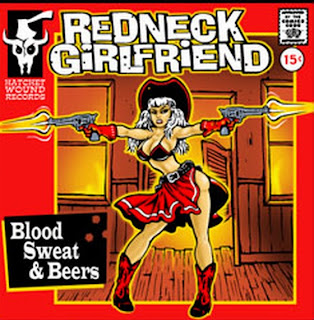 From Copenhagen Angel, by Chris LeDoux: She's got a plug in both her cheeks, She's got Copenhagen in her lips, She's got a roll your own between her teeth, and I've never even seen her spit.
Posted by :P fuzzbox at 9:58 PM 12 comments: 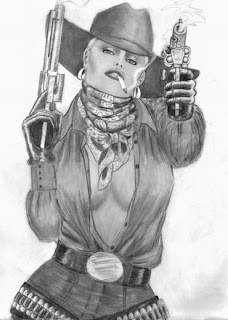 I seem to be enjoying a trip down memory lane this week so what the hell. Here is a re-posting of a story that I did on November 9, 2005. I am sure the aroma of the post hasn't changed a bit. 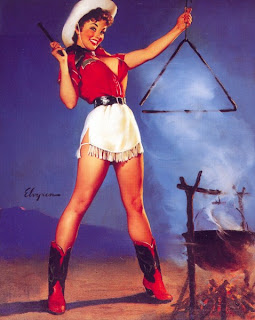 This weekend while browsing in Target, I saw a handy dandy kitchen appliance; an electric tabletop barbeque grill from Crockpot, that can hold three racks of ribs. Although it is against my religion to call anything cooked indoors barbeque, this looked handy for those times when the West Texas wind is barreling across the plains or the occasional hard rain, although I have carted the pit under the car port in times of need. To prove my dedication, I have even barbeque during a tornado watch patiently watching my smoking pit as the neighbors scurried for the storm cellars. When the all clear signal went up, I was taking up my ribs as the heads of the neighbors peeked from the ground like a bunch of mullet headed snake charming gophers.

Living in Redneck America, the fine art of the barbeque is not only a prerequisite but an intuitive thing ingrained in the womb. I consider myself a fair hand at cooking anything that doesn't dodge bullet or bumper but I generally do not do much in the area of cooking in a dutch oven except for a cobbler or chili, but once I had a hand in producing one of the most dangerous pot of beans known to man.A group of friends and myself decided to have a kegger/cookout about 20 miles from civilization out in BFE. After the meal had been devoured and buckets of beer had been drank, the only two left standing were Charlie and myself.

We were both night owls with a renowned prowess in the drinking arena. When the first light of false dawn arrived, we felt the inevitable hunger pangs associated with any all night drinking binge. Upon searching the campsite, we discovered that the only foodstuffs were some dried out tortillas and about two pounds of beans left out by the fire.The crusted over beans more closely resembled a dried out creek bed than anything edible. Therefore we doctored it up by pouring in a generous amount of Budweiser from the keg and put the pot back on the fire. We also figured that anything that crusty had to have lost much of it's taste so we added a copious amount of salt. As the sun peaked over the horizon, the pot was bubbling with an eery intensity.

These beans were fantastical. Not only were they crazy tasty but they produced intestinal gas that is legendary to all the other campers/victims that arose to the stench wafting through the West Texas Plains. I have not ate any dish since that created in my digestive system such a lethal and toxic flatulence. The lasting power, volume, and stench of the malodorous emanations were an incredible once in a lifetime achievement. Beans anyone?

Back To The Beginning 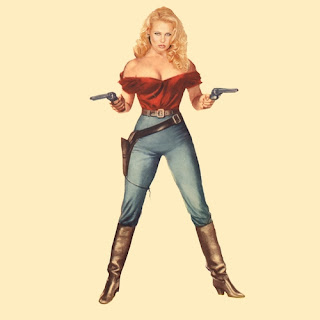 When I first started blogging, besides the usual lame attempts at humor, I did weekly features of pin-ups. I would pick a theme and post pics. Sometimes I would tell a little tale and sometimes I simply posted a pin-up.

My very first theme was Cowgirl Week, so I will re-visit this theme to kick things off. This week I will be posting pics that I think covers my love of pin-up art and telling a few tales for good measure. Now to see if I can still do the daily post thing.

My first little tale of the week is a reposting of one of my faves. It is from October 12, 2005. I hope it has aged well. 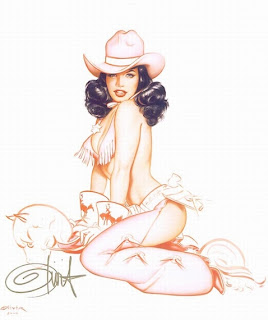 For those individuals not familiar with the sport of Forklift Rodeo which is much like bullriding, I will give a few particulars regarding the rules and practice of the sport. First the forks of a large industrial forklift are driven into two stalks of 8" diameter polyethylene (plastic) pipe about 12' in length. Secondly, the contestant/victim straddles the two stalks of pipe close to the end of the stalks. Thirdly, a nylon strap approximately 14' in length is wound around the pipe much like a bullrope and is used to dally the hand the same as a bullrider. Then the forklift operator raises the forks so that the contestant/victim is about 3' off the concrete floor so that the contestant/victim will not bang the ground with his feet, revs the engine and pops the clutch. This procedure causes the pipe to bounce wildly and gives the contestant/victim one hell of a ride, that most of the time causes him to crash to the concrete floor.

The sport of forklift rodeo had been practiced for a while at the plant but the shift I was on perfected the sport. This was due to the makeup of the people on the shift. You have already been introduced to the supervisor, if you haven't just scroll down a couple of posts and read about him in Random Acts of Stupidity, there was also Bronco Billy, who was the supervisor's faithful yes-man, myself, and J. D. an ex professional bullrider; whose claim to fame was that in the mid-80's , he was the winner of the Hard Luck Award at the Houston Livestock Show and Rodeo. You might have actually seen J.D. on television. The footage of his award winning performance has been on more than one clip show, I saw one entitled "Dangerous Games People Play". He made the full eight seconds but then got hung in the rope and was beat half to death. At times I wondered if he might have been stomped in the head a few too many times but I never doubted his courage. Every one of his stories ended up , 'And that is when I ended up at the hospital in (insert name of city here).

To give everyone a glimpse into the actual practice of the sport, I will relate a story of one event. We were training a new employee and the supervisor and Bronco Billy convinced the newbie to try out forklift rodeo. J. D. helped dally him down and I took up a spot close enough to the action to innocently spectate. After the newbie was strapped in the supervisor took his position as the forklift operator, reved up the engine to a deafening roar, and popped the clutch. On the first bounce, the newbie bounced 10' in the air and came crashing to the concrete floor. The supervisor and his faithful yes-man stared in horror at the prostrate body of the newbie wondering how they would get the supervisor's ass out of this crack. I was actually trying to keep a straight face after I saw that he wasn't dead, I can't help it for some perverse reason the pain of others amuses me. That is when J. D. walks over, turns his head and spits tobacco juice a polite distance from the newbies head, and says "Puss". I did manage to get mostly out of earshot before busting a gut.

( No Idiots were seriously injured or fired during forklift rodeo. And all names have been changed to protect the guilty.)